Silver Dollar Fair Lives Up to Its Name 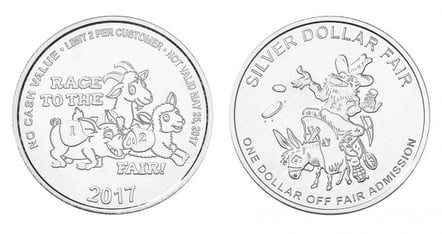 (Cincinnati, OH) – Current residents of Chico, California can’t imagine a year without their beloved Silver Dollar Fair anymore than they can imagine it going by any other name. Turns out, the notoriety of the fair and its name go hand in hand— and it all comes down to the silver dollar.

The fair hasn’t always enjoyed such support from the community. For decades, the fair was on again off again—canceled due to gambling, financial issues, or general lack of interest. In the 1950’s, local merchants began pulling their support once and for all, noting a lack of business generated by the fair. W.H. “Old Hutch” Hutchinson, a board member at the time, needed a way to prove the fair’s benefits to merchants and the community. He ordered 50,000 silver dollars from the U.S. Mint. That year, all the fair’s business was exchanged in silver dollars. As the large, heavy coins filled their cash registers to overflowing, the merchants got the message.

Before long, the silver dollars spread across Northern California, along with the fair’s notoriety. Today’s fair is run with more conventional and convenient currency—a credit card is, after all, much lighter than a pocket full of silver dollars. Still, the name stuck and The Silver Dollar Fair has never looked back. A Grandstand was added in 1960, as were more events and two extra days to accommodate the popularity.

While much has changed over the years, the fair’s namesake continues to play a vital role in the five-day festival. Customized tokens offer $1 off fair admission, and are used as promotional tools leading up to the fair. According to CEO Scott Stoller, the tourist coins are now much smaller and lighter than a silver dollar and customized with the Silver Dollar Fair’s logo each year.

While “Old Hutch” ordered silver dollars from the U.S. Mint, Stoller worked with Cincinnati, Ohio based Osborne Coinage to custom design the tokens. This year’s tokens feature a pig, a goat, and lamb under the words “Race to the Fair” on one side, and on the other, a prospector under the words “Silver Dollar Fair, One Dollar off Fair Admission.”

“The process is quick and easy and the turnaround process is usually faster than expected,” Stoller said of working with Osborne.

Stoller ordered 15,000 of the custom silver dollars for promotional uses, to drum up support and excitement in the off-season. At the fair kickoff dinner, two of the aluminum tokens are placed set at each place setting. Teachers give them out to students throughout the year as reading prizes.  In the weeks leading up to the Fair, many news outlets interview Stoller, who suggests that the public to drop by the office to pick up tokens while supplies last.

“We put them out on our office counters and encourage folks to take as many as possible so they can help spread the word of the Fair, we have many self-appointed fair ambassadors.” Stoller said.

Stoller and his staff gave away so many custom silver dollars last year that he upped the order to 15,000 this year. Interestingly, only 30% of the tokens are redeemed each year. Residents enjoy them so much they’ll hold on to them as keepsakes and pay the full entrance fee rather than part with the token. Or, because different designs are released each year.  they’re collecting them.

It’s a win-win for Stoller: with the customized front and back, the tokens capture the spirit of the fair, and act as miniature billboards encouraging a visit. Whether they end up in a lunchbox, a cup holder or change purse, the tokens keep the Silver Dollar Fair top of mind for Chico residents.

“The whole idea is to tie in with the namesake of the fair,” Stoller said. The custom silver dollars do just that, recalling the fair’s history and revered place in the community.

The 100 nickel-silver coins are given to staff, fair board, and sponsors to honor their contributions to putting on the fair each year. A little larger and heavier than the promotional tokens, these commemorative coins are a unique way of memorializing and thanking the people that go above and beyond and continue making the fair such a success. Coins that are leftover are sold at the fair for $5 as unique souvenirs—bought in bulk for $2.05 each, selling them bags a neat $2.95 in profit.

“Old Hutch” had no idea what he was starting when he brought in silver dollars in the 1950’s. The uniqueness of the currency went down in local legend, and told the story that the fair had much to offer local businesses and community members.

Sixty years later, Stoller’s customized coins have a different purpose, but tell the same story. As a promotional tool, the coins get the word out about the fair all year long—drumming up support and excitement for the fair, and ensuring the Silver Dollar Far will be thriving in the next sixty years to come.