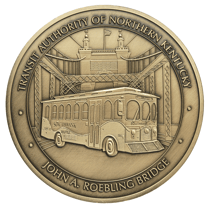 Cincinnati, OH – Long term maintenance of roadways can be a real nuisance – causing routes to be diverted and schedules changed.  When that roadway is bridge – and the maintenance work is accompanied by weight restrictions, well the headache can get worse.  But officials at the Transit Authority of Northern Kentucky saw this as an opportunity to re-christen the route with better service at a lower price – in new distinctive vehicles.  And they topped it off with a bridge re-opening – a momentous event for all to remember – complete with commemorative coins to remember the occasion (which were as unique as the project itself).

To help kick off the new Southbank Shuttle service – which coincided with the re-opening of the historic John A. Roebling Suspension Bridge – TANK officials teamed up with their counterparts from other local government and public-private partnerships.  The nearly 300 attendees to the event, which re-established vehicular traffic on this historic bridge, were given a commemorative coin to remember the occasion.  Minted locally by Osborne Coinage, the hefty 3-inch diameter bronze coin is minted with a trolley on the distinctive bridge on one side and a logo of the much anticipated and now ready Banks re-development project on the other.

The group had 500 custom coins minted – which was fortunate, because many of the 300 government officials requested additional coins for colleagues and loved ones.

“Everybody loved the coins,” recalls TANK Communications Director Gina Douthat, “they were a great memento for the attendees, and a really unique means of commemorating this once-in-a-lifetime event.”

The John A. Roebling Suspension Bridge crosses the Ohio River and connects Covington, Kentucky with Cincinnati, Ohio.  Every day thousands of cars, trucks, and busses traverse the 1,057 foot span known in local parlance as simply “the suspension bridge” without an awareness of its place in history.  They may not realize that for 16 years this engineering marvel was the longest bridge in the world.  Then it was surpassed by another structure – also designed by Roebling – with the christening of the Brooklyn Bridge.

But while locals may not be aware of the history of this iconic structure, or the amount of traffic that relies on it for their daily commute, TANK officials clearly understood the magnitude of the situation.

So the authority purchased eight new lightweight trolley busses – both to accommodate the new weight restrictions, and to harken back to the historic nature of this iconic structure that the trolleys travel each day.  The Supreme trolley busses, which have a gross vehicle weight of less than 22,000 pounds, were purchased from Specialty Vehicles at a cost of nearly $170,000 each.

The distinctive new trolleys allowed TANK to increase service and reduce costs.  With the new vehicles, TANK streamlined the service to allow stops within one block of most tourist and event destinations in the three cities served – Covington, Cincinnati, and Newport.  The new route operates with 15-minute frequencies seven days a week for added convenience of both residents and tourists alike.  Fares for the Southbank Shuttle were reduced to just $1 per ride (payable with either cash or a token available at many local merchants and TANK locations).

“A one dollar fare makes the service easier and more economical for everyone to use” stated Andrew Aiello, TANK General Manager.  “A family heading to a Cincinnati Reds baseball game, a Cincinnati Bengals football game or an out of town visitor will really see the Southbank Shuttle as a value…but also a great convenient and fun feature that makes it easier to travel in the downtown areas.  And the trolley vehicle stands out, making the service easy to identify – especially for visitors to the area.”

Southbank Shuttle riders are reminded of the service by the distinctive trolleys - and remembering the service is the first step towards building ridership.

Clearly TANK officials are on the right path towards generating awareness of the Southbank Shuttle with these distinctive trolleys, lower fares and better service.  Anyone associated with the project needs only to glance at their distinctive commemorative coin from the bridge re-opening to recall the success that comes when new innovations are applied to old problems.