Minted by Osborne Coinage, the Armstrong Air and Space Museum commissioned a limited edition collectible silver and brass coin in celebration of their 50th Anniversary.

Released on GlobeNewswire.com on March 10, 2022

It is Osborne Coinage’s privilege to announce their partnership with the Armstrong Air and Space Museum in Wapakoneta, Ohio, to mint their limited edition 50th anniversary commemorative
round, recognizing fifty years of history, education and celebration. For nearly 200 years, Osborne Coinage has worked as America’s oldest privately owned and operated mint in Cincinnati, Ohio, to cement special moments through the intersection of art and history on first-rate collectible rounds.

After the out-of-this-world success of the first collectible coin minted by Osborne Coinage in 2019, featuring Neil Armstrong’s lunar landing and honoring the 50th anniversary of the mission to the moon, there was an inspiration to commission another. The proceeds from the sale of that first coin, commissioned by both the Armstrong Air and Space Museum and the City of Wapakoneta, served as a fundraiser, providing resources for the 2019 “First on the Moon” citywide celebration events. That memento sold out immediately upon release and is currently available on the secondary market at three and four times its original sale price.

Encouraged by this previous triumph, the Armstrong Air and Space Museum turned again to Osborne Coinage to mint their very own, limited edition, collectible round in celebration of the museum’s 50th anniversary spanning July 20, 1972, to July 20, 2022. The one-of-a-kind collectible, as defined by the artistry on the coin, serves to honor the commitment, value, and longevity of the museum. 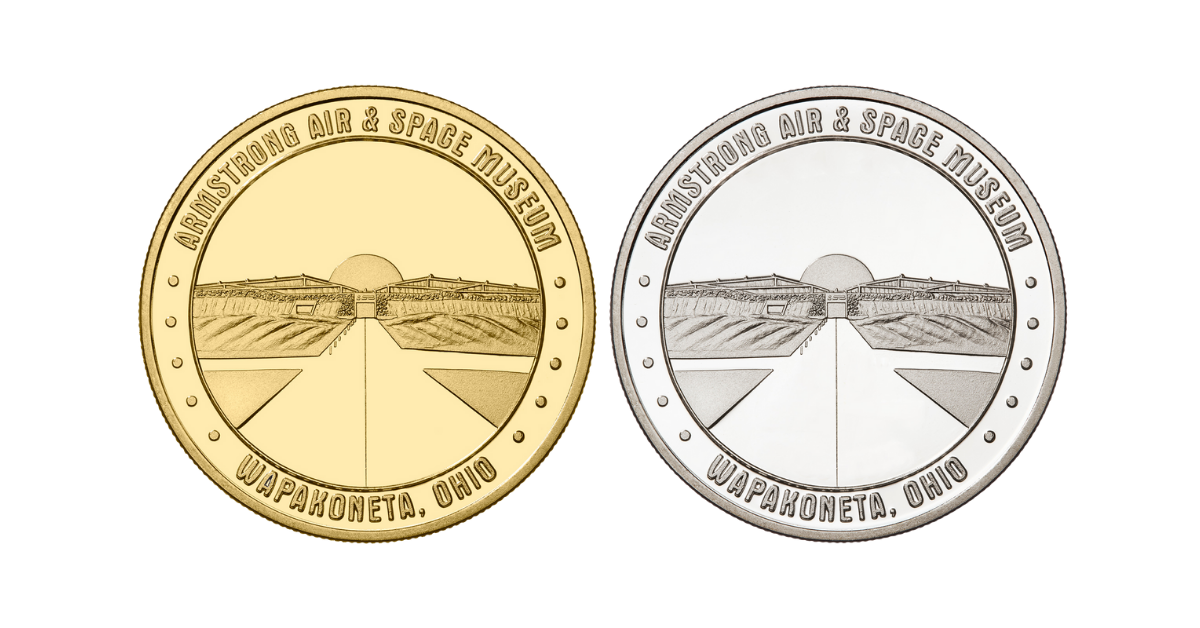 The front of the commissioned coin displays an elegant engraving of the unique entrance to Wakaponketa’s paramount project, the Armstrong Air and Space Museum. The intricate image of a moonlike sphere embedded into the surrounding grounds of Wapakoneta reflects the sentiment and support of the community at the time of the first lunar landing. A direct line cuts through the coin along the walkway from the museum to the pressed “Wapakoneta.” This design mirrors, to an extent, the artistry from the “First on the Moon” coin and was meant to reiterate the appreciation for as well as solidify the connection between the community of Wakaponketa and the museum’s success.

The groundbreaking achievement of the hometown hero is also symbolized through the visual representation of a prolonged pathway, pointing patrons to this monument, and to Ohio’s contribution to aviation and space exploration. Each step toward the futuristic moonbase museum serves to represent the challenging and long-lasting journey of mankind to successfully travel to the moon and back. 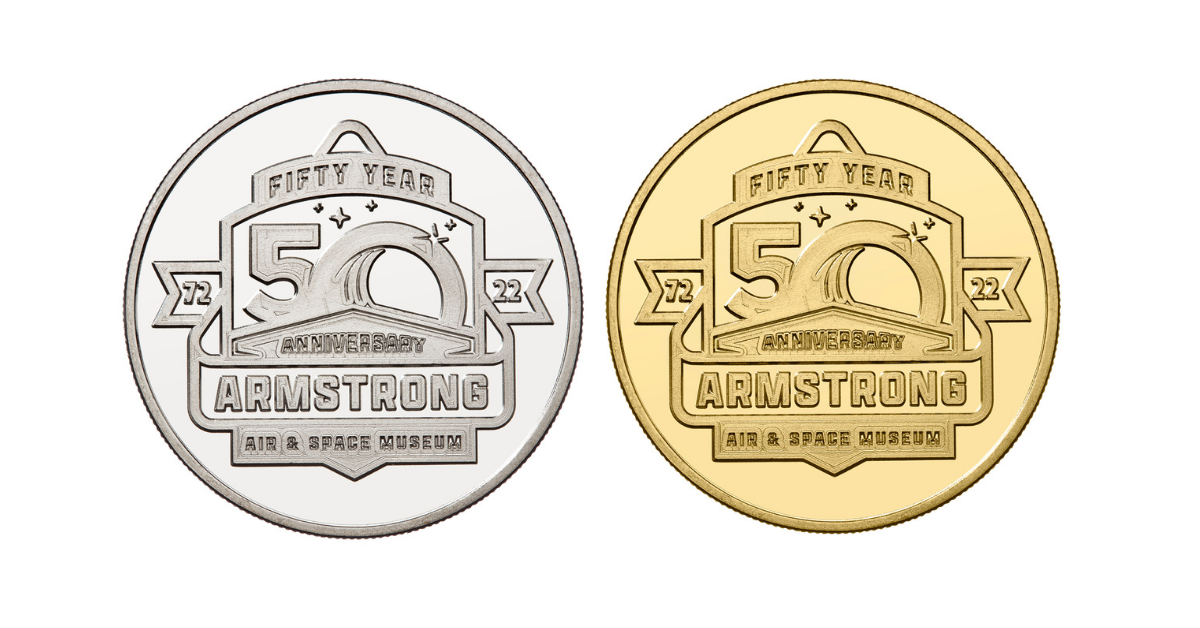 The “Fifty Year Anniversary” text emblazoned on the back of the coin serves as a clear reminder of how long the museum has been successful as a result of the support of visitors from local, state, and national communities over the last half-century. The “50” is stylishly embellished with a distinctive spherical symbol surrounded by stars to represent space travel as well as the mission’s destination of the moon. The museum was constructed with this symbolic shape in mind three years to the day after local legend Neil Armstrong was the first man to walk on a celestial object outside of Earth. “22” and “72” artfully enclose the central “50” on the receding ribbon and add to the delicate details of this design.

Custom coins for your next big event - download our FREE catalog today!

“The artistry and precision found in this round’s details demonstrate the selective skill and craftsmanship Osborne prides itself in producing,” Gibson Olpp, Marketing Manager, Osborne Mint, and Osborne Coinage, said. “Our detailed process provides a unique experience for the creatives and consumers with the end result always being the ability to hold, appreciate and gain more as a collector. Projects like these enable us to be part of history in the making.”

The Armstrong Air &amp; Space Museum collaborated closely with Osborne Coinage to exclusively release these commemorative coins on February 19, 2022, to coincide with the anniversary of Neil Armstrong’s Learjet 28 flights. A very limited quantity of only 250 silver and 500 golden style brass coins exquisitely designed and made in America are available for sale. A protective container is included for preservation as well as presentation. 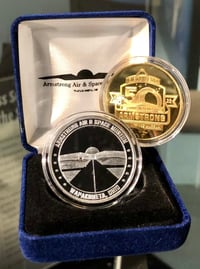 The silver version of this collectible coin is a one-ounce .999 solid silver round, 39 mm in diameter with a reeded edge and a shared thickness of 0.12. Additionally, the edge of each silver coin is engraved with “.999 F.S.”. The brass version shares the same dimensions, weight, and sophisticated style. Per the strict manufacturing standards at Osborne Coinage, each coin is held to the highest standards for purity, weight, and production. The limited-edition silver version comes with an attractive blue felt case imprinted with the Armstrong Museum’s logo on the interior of the lid. The silver coin is priced at $85, and the golden brass coin will cost $10. Make sure to seize these iconic coins before their value skyrockets!

The fuel for this fifty-year celebration began on July 20, 1969, when Ohio governor James Rhodes proposed a museum as a monument to the achievements of not only Neil Armstrong, but "all Ohioans who have attempted to defy gravity," as well as to the history and success of the space program itself. One year later Armstrong’s hometown of Wapakoneta, Ohio, came together to raise over a half-million dollars in matching funds to establish the Armstrong Air and Space Museum. Architecture plans for the museum debuted at the 1970 groundbreaking ceremony and featured a fifty-six-foot wide dome representing a futuristic moonbase design. Two years later on July 20, 1972, three years to the day Neil Armstrong walked on the moon, Mr. Armstrong himself christened the museum opening and became its first visitor. This grand opening ceremony serves as the catalyst for this year’s 50th-anniversary celebration, and the inspiration for this collectible coin.

Guide: 5 tips on how to maximize your fundraising campaigns with Osborne custom coins.

“For fifty wonderful years, we have endeavored to ignite imaginations and inspire visitors to see themselves as tomorrow’s explorers working to solve problems in the world today with courage and curiosity for the unknown,” Logan Rex, Armstrong Air & Space Museum Communications Director and Curator, said. “We strive to continually connect with recurrent visitors throughout our community and pull in new pilgrims with exciting programs and engaging educational environments.”

In a world full of mass-produced items, collective coins provide a creative way for the public to preserve a piece of history in their hands as well as pass along something of value to future generations. Do not space out and miss this stellar opportunity to own the limited edition anniversary coin, which will only be sold through the museum.

Osborne Mint products are proudly Made in the USA and every purchase of an Osborne Coinage and Mint products supports American jobs.

Established in 1835, Osborne Coinage is America’s oldest continuously operating private mint. The family of brands includes Osborne Mint, TokensDirect, and Van Brook of Lexington. The mint, a 60,000 square foot facility in Cincinnati, Ohio, houses development, engraving, and manufacturing of quality collectible rounds and coins. Products made by Osborne are manufactured to strict standards for metal purity, weight, and dimensions. Osborne strikes millions of coins, tokens, medallions as well as numismatic quality rounds and bars that are sold through distributors, direct to consumer, and B2B.

Stay in the know and follow our hashtags: #OsborneCoin, #OsborneMint 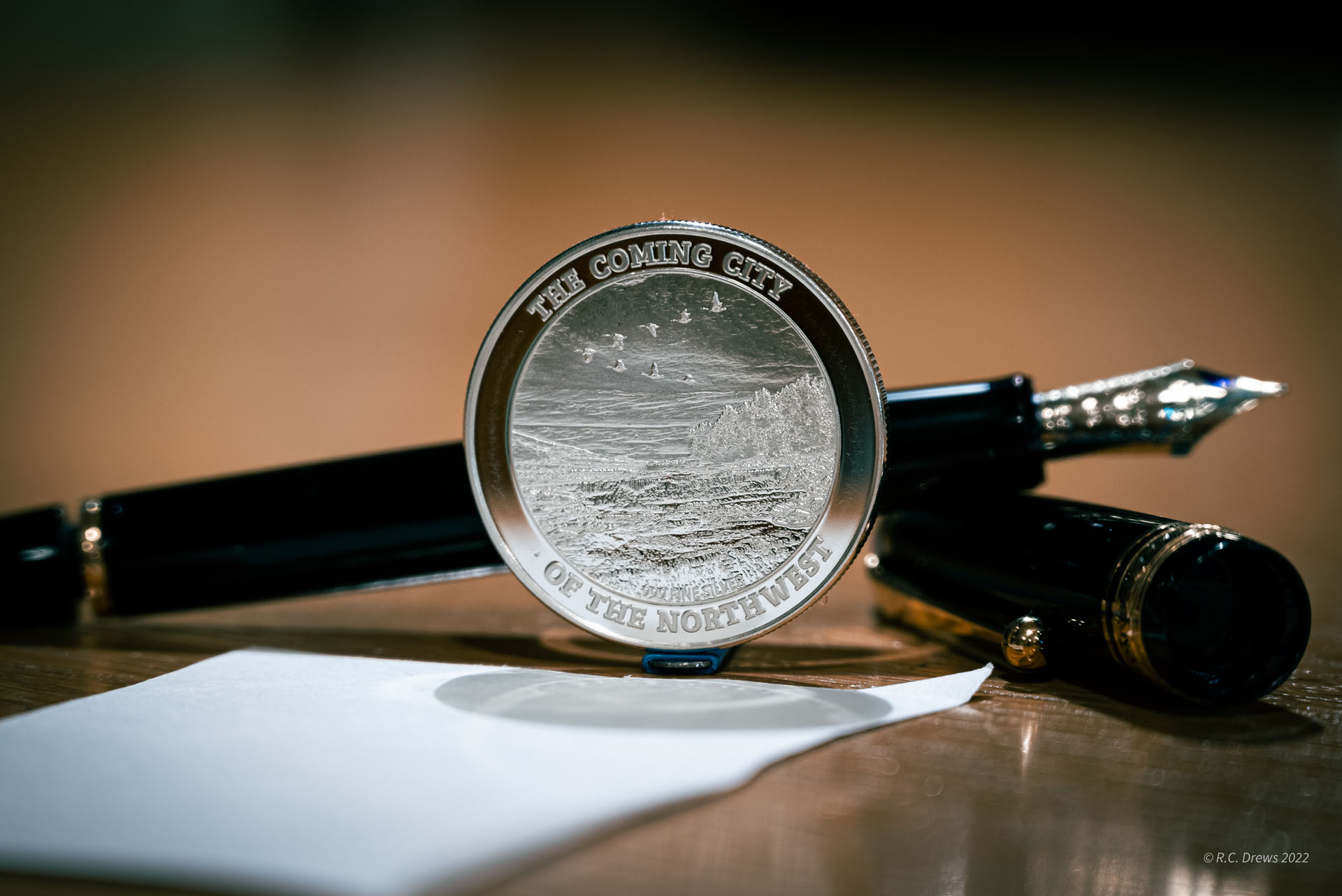